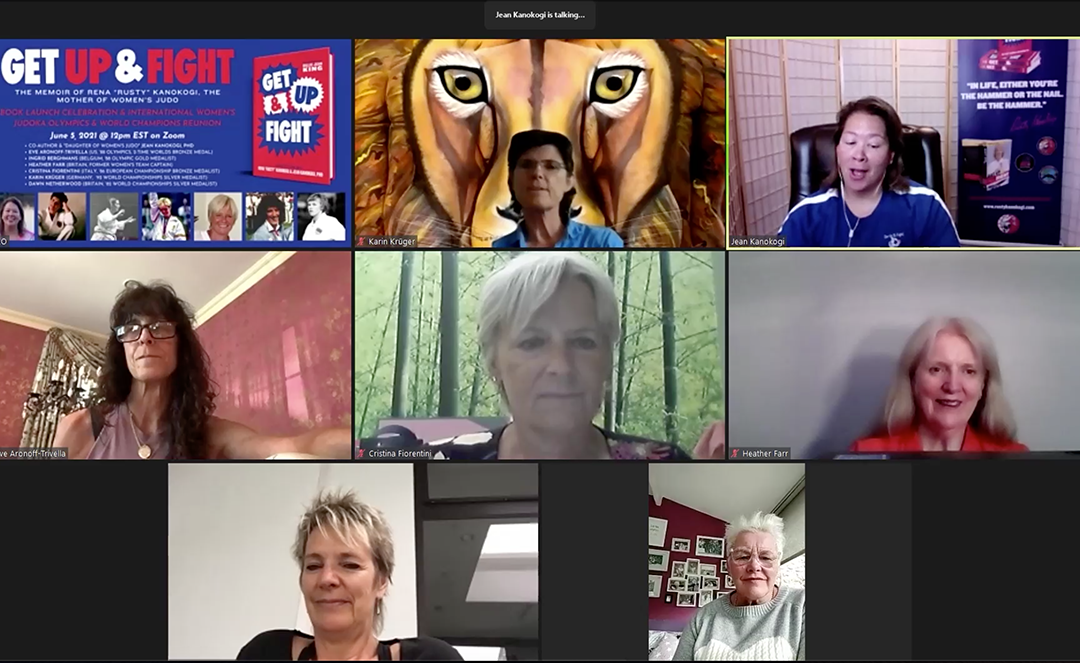 Rusty Kanokogi is one of the most renowned yet unsung heroes of the past hundred years. In her new memoir, Get Up & Fight, published posthumously by her daughter Jean Kanokogi, Rusty shares the uphill battle she waged in her more than fifty-year career in judo fighting for women’s rights both on and off the mat—a journey which ultimately led her in front of the roaring crowds of the Olympic Games.

From Leader of a Coney Island Girl Gang to the Olympics:

Educated on the streets of Coney Island by “pitchmen and hustlers,” as a teen, Rusty found herself the leader of a girl gang, getting her kicks from street brawls and petty crime. She was headed down a dark path—until, as she put it, she “was saved by the sport of judo.”

In 1959 Rusty fought in a judo championship against a man and won, but when the judges discovered her gender, they stripped her of her title. Women were not allowed to compete—and certainly weren’t allowed to win. In that moment, Rusty made it her life’s mission to ensure that no woman would ever suffer such an indignity ever again. This vow sparked a lifelong career fighting for equality—a tireless campaign she would use to fan the flames of change for decades to come.

Rusty, known around the world as “the mother of women’s judo,” earned her notoriety birthing a movement, teaming up with tennis star Billie Jean King to help pass the infamous Title IX anti-discrimination legislation in 1972, founding and hosting the first Women’s World Judo Championship in 1980, and earning female judo athletes a place at the 1988 Olympic Games in Seoul, South Korea for the very first time.

About the Book Launch Virtual Event:

Other event highlights include a live reading by the memoir’s co-author, audience Q&A, prizes and giveaways, and a chance to share personal stories about Rusty and her legacy.

Proceeds from the event support the Monmouth County Society for the Prevention of Cruelty to Animals.

About Get Up & Fight

In her uniquely raw, unfiltered, humorous voice, Rusty recounts the tales of her remarkable life and journey from the rough streets of Brooklyn, to the offices of the political, powerful, and persuasive, where she established herself as a major force in the world of women’s rights and the sport of judo. Rusty’s memoir is a love story filled with passion and righteousness—for her sport, her family, and her way of life as a judoka.

Often called a pioneer, Rusty fought to give women voice and agency, in life and in sports. She did not see human limitations, only possibilities. The establishment told her “no,” but “no” was not a part of her vocabulary. Instead, Rusty fought like hell, and won.

In her own words, Rusty decided to “be the hammer,” not the nail. Her legacy lives on through this new memoir, which was her final gift to the world.

Rena “Rusty” Kanokogi is recognized around the world as “the mother of women’s judo” for her immense contribution to the sport and her work ensuring women’s inclusion for the female competitors at the international level. In her more than fifty-year career, she became the first woman to attain the rank of seventh-degree black belt, founded the first Women’s World Judo Championship in 1980, and was the driving force behind women’s judo inclusion in the 1988 Olympic Games in Seoul, South Korea. Her many credentials include international judo competitor and referee, Olympic judo coach, equal rights advocate, and sports commentator. She is interred in the Kanokogi Samurai family burial site in Kumamoto, Japan, with the inscription “American Samurai.”

Publisher: All She Wrote Productions

About All She Wrote Productions

All She Wrote Productions is shaking up the traditional publishing industry by elevating stories that matter and helping unique authors get the attention they deserve. All She Wrote is a boutique full-service publishing and story accelerator on a mission to amplify the voices of women, non-binary, and underrepresented authors. As a hybrid publisher, All She Wrote selects unique authors looking for true partners in the publishing process. All She Wrote Productions offers authors a full publication package that rivals traditional publishing, a greater voice in the decisions being made about how to get their book out, and into the hands of their readers, and a much greater slice of the royalty pie.

Buy The Book on Amazon or Bookshop.org (support indie booksellers in your area!)