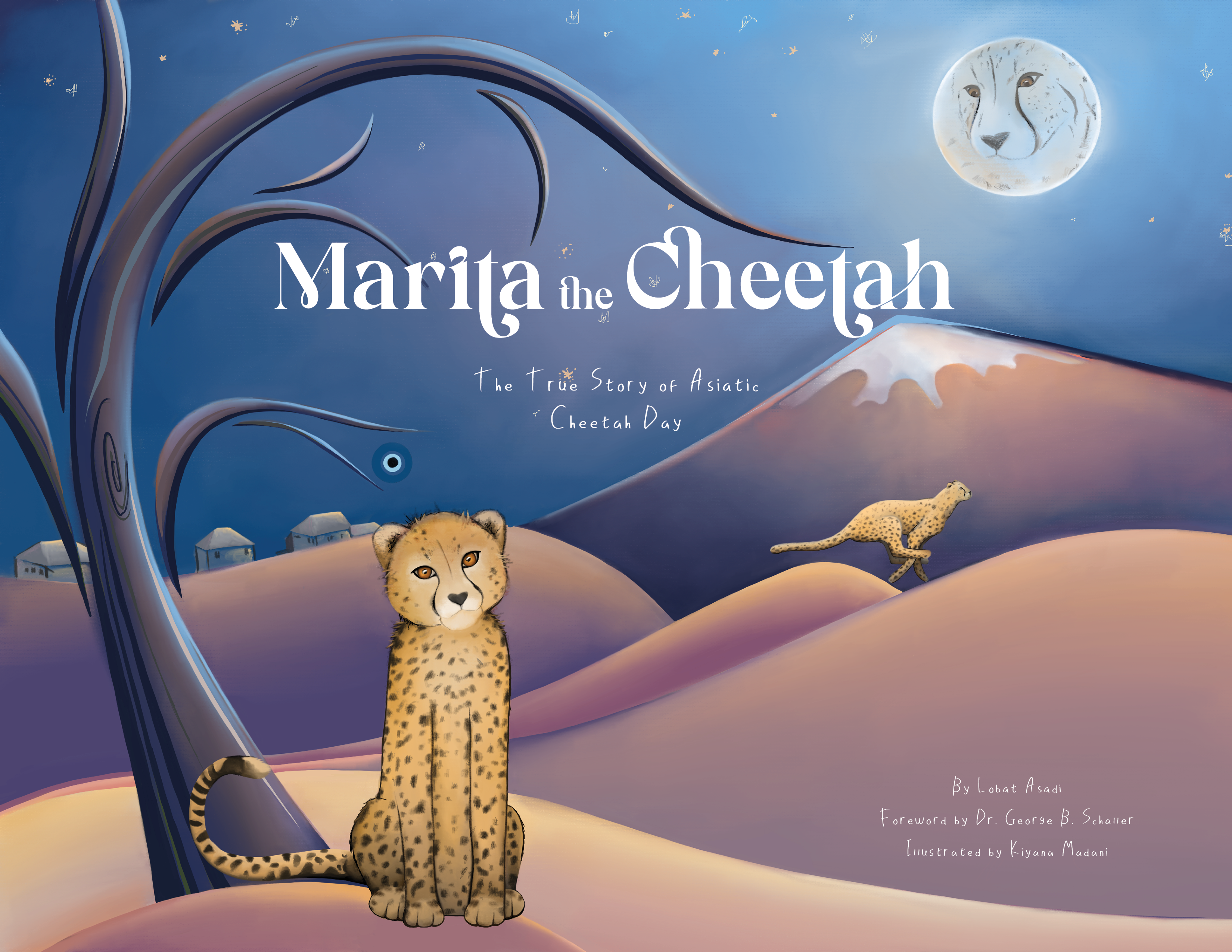 By Lobat Asadi
Foreword by Dr. George B. Schaller
Illustrations by Kiyana Madani

Marita the Cheetah is a true story of orphaned cheetah cub that was saved from a mob of angry villagers, by the author’s father, a wildlife conservationist in Iran. It is written for young readers and middle readersm, but everyone will love the sweet story and fantastic illustrations. Audiences will love learning about cheetahs and Persian culture, while being engaged in a fantasy-like recollection of a father and his daughter, who managed to save a cheetah against all odds. Marita was not onluy saved, she became a mascot for hope behind conservvtion efforts in Iran, and became the reason behind National Cheetah Day falling in August 31st.

Lobat Asadi is academic, author and artist that was featured in a National Geographic article, as well as recognized for International Women’s Day, 2022 because she is a passionate wildlife advocate on an “inherited mission” of cheetah conservation. In 1995, her father, Dr. Hormoz Asadi (1949-2008), spearheaded alliances with the United Nations, the International Union of Conservation for Nature, as well as global wildlife experts such as Cheetah Conservation Fund to help save Asiatic cheetahs. In fact, Carole Baskin, founder of Big Cat Rescue, remembers him as being  “passionate about protecting these cats and his role in the overall wellbeing of the planet.” Today his daughter, Lobat Asadi, Director of ACCP in the United States, is raising awareness about the last remaining cheetahs of Asia. “They have dwindled from about 100 when my father began ACCP, to less than 35 today. That is why I am raising awareness through education, art and media – cheetahs need much more international support.”

As Creative Director of Cheetah Heart, a multimedia project of books, a podcast, an animated short and a documentary about the cheetah conservation in Iran, Lobat is authoring “Marita the Cheetah,” about a real cheetah cub her father saved – and the reason behind National Cheetah Day – August 31st!  She is an “artivist” that “harnesses the power of art for social, political and environmental change,” and has even written a book about it. Lobat collaborates with artists to create works that raise attention to the plight of cheetahs, such as the Cheetah Club. She is also designing an endangered cat – themed line of clothing and apparel.  Lobat is also an outspoken wildlife advocate, especially regarding the illegal poaching, and trafficking of African cheetahs. She supports the Big Cat Public Safety Act, which would ban ownership and breeding of all big cats as exotic pets in the United States. You can be the first to know about artivism, book releases, and get filmmaking updates, as well as learn about the Asiatic Cheetah Conservation Project on asiaticcheetah.com and, be sure to get on the mailing list.